Not many years ago, a newly elected governing body in the newly democratic Maldives, decreed that tourism would no longer be a prerogative of the rich, and invited the local islands to invite foreigners into their midst. Located conveniently near sandbanks and diving hotspots, with white sand beaches of its own, Maafushi was one of the first local islands to set up shop. The island’s first licensed guest house, White Shell Beach Inn, with its pocket-friendly rates, rose quickly to success in 2010, and a mere five years since, the last time I was on Maafushi,  thirty seven others had joined the ranks on a plot of land smaller than some of the malls that dot the city I now live in. 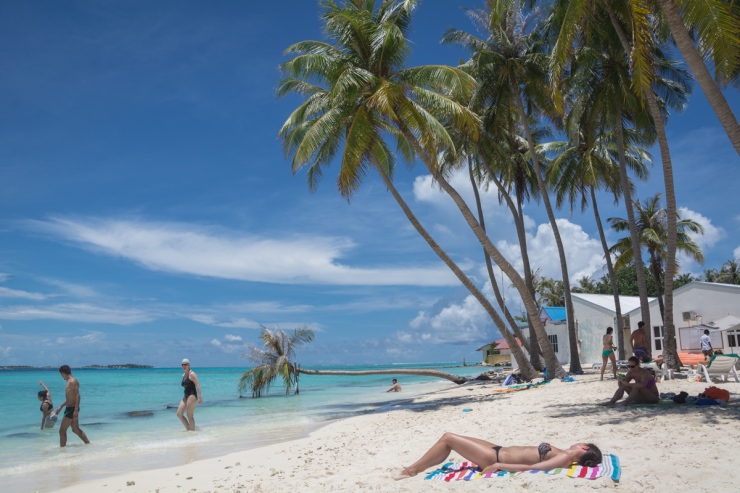 Maldives saw its first holiday resort open in 1972, despite the UN deeming its islands unsuitable. For over three decades, more and more previously uninhabited islands were turned into mega-luxury resorts, attracting the rich and famous from the world over. You’d think this would do wonders for the country’s economy. And it certainly did, though the gains of the industry remained with the handful of national tycoons and the many foreign investors and corporations that had found the islands to be a tourism goldmine. The workforce on the resorts consisted mainly of foreigners too–immigrants from neighbouring Sri Lanka, southern India, Bangladesh and the Philippines, who steadily filled new vacancies while the locals were encouraged to stay away by the conservative government of the time.

The 2008 elections brought in a welcome change. The young and educated Mohamed Nasheed’s MDP won the country’s first democratic elections by a landslide, and the new leaders got to work soon after. Besides setting up a national ferry system, and raising the environmental alarm (the Maldives is one of the lowest-lying countries in the world and is at risk of sinking into the Indian Ocean within the next thirty years), President Nasheed welcomed foreigners into the local islands for the first time. To meet their holiday needs, guest houses and hotels started springing up, mainly in Kaafu atoll, which consisted of the capital city Malé, and the country’s first backpacker-friendly hotspot, Maafushi. 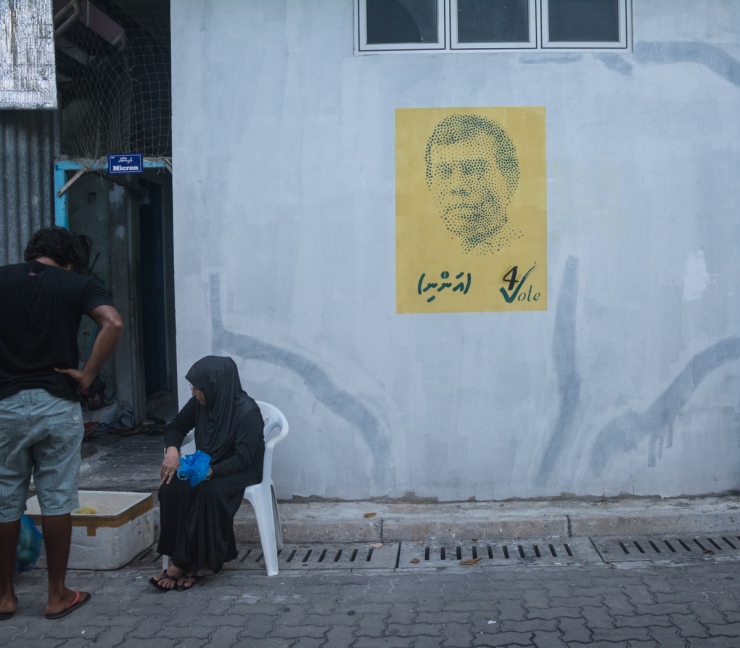 It was reading about Maafushi that made me and my partner realize that we could visit the Maldives without having to sell our kidneys. Knowing that we would be able to meet Maldivians, eat their food and see how they lived was an added bonus. With a teenaged brain fed on and numbed by typical tourism advert photos of luxurious bungalows on clear blue waters, Western tourists sipping cocktails on sun beds, celebrating honeymoons on gorgeous unpeopled beaches, I, like many others of my generation, knew little about this atoll country beyond its well-known tropical offerings to affluent holidaymakers. But it was time to remedy matters.

On our first visit, in the summer of 2013, Maafushi seemed to be practising a variety of tourism that had worked out almost to a fault. Ten or so small-scale guest houses operated out of the island and organized various water activities around the atoll. Fishing was still the mainstay, though you could see that the new ventures had provided a new and more exciting kind of employment to the islanders, including several women who worked as receptionists and in housekeeping. Bikinis were not allowed anywhere on this still conservative Muslim island, except for its northern tip which, hidden from view behind a slapdash palm-leaf barricade, had been turned into a resort-like hideaway for foreigners. These tourists of course were free to walk the length and breadth of the island in less revealing clothing, and for the first time, this allowed the islanders a chance to communicate with the outsiders who had been visiting their country for decades, the same way it allowed the foreigners to get to know the Maldives better than they could on resorts where it is sometimes possible to not meet a single Maldivian. 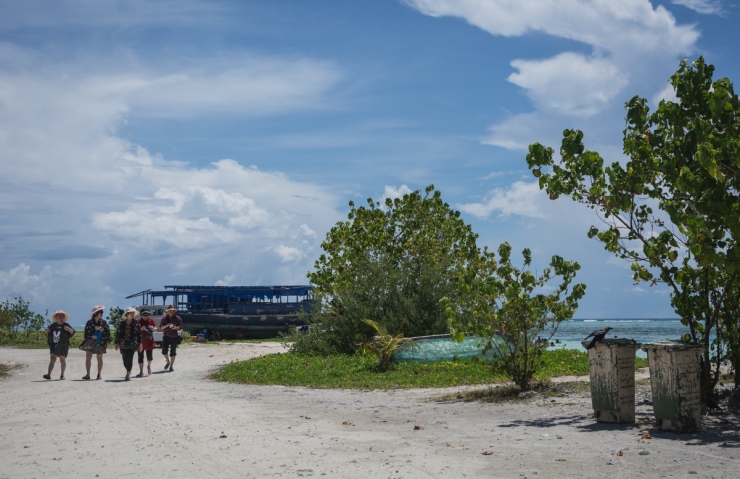 It seemed a win-win for all. But around the same time I was swimming with clownfish and turtles, the Maldives was also quietly sweeping under the proverbial carpet the waste that had come out of the extravaganza of the last four decades. Thilafushi, a lagoon-turned-island literally created out of garbage, the country’s worst nightmare, was piling up on its already tall mountains of burning trash. It was created to take care of the problem side of the booming tourism industry and the overpopulation of the capital Malé.

Things were not as bad in Maafushi, yet. In 2013, the island’s trash problem was well within its control, and in the traditional Maldivian way, it was collected from homes and guest houses, and burnt daily on an empty eastern stretch of the island.

I returned to the Maldives two years later to attempt a photo-documentary about the country’s relationship with tourism, focusing mainly on the disaster named Thilafushi. If you happen to visit Vilingili, an old resort obliterated by the 2004 tsunami and now a quiet residential town, you might pick up on the smell of burning waste. Follow it and you will arrive on the island’s western shores to see smoke billowing out of a range of mounds, smoke that wafts over not only to this town, but even to the overpopulated capital a few kilometres behind it. That’s how close Thilafushi is to civilian life in the Maldives. 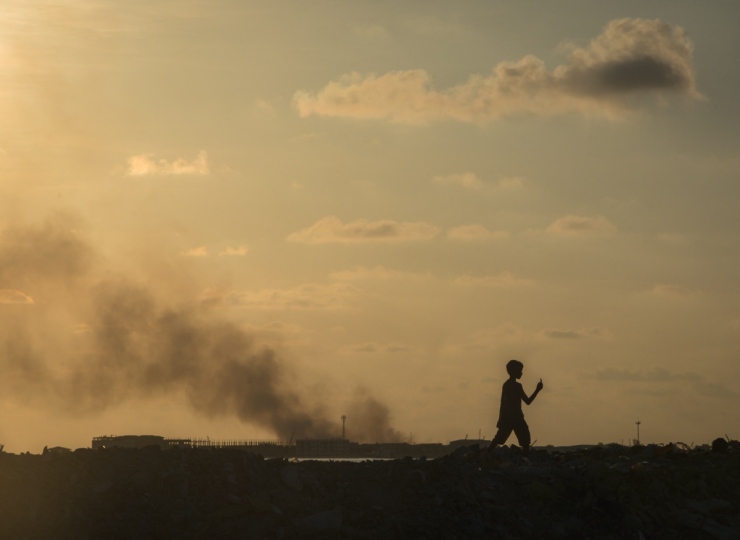 But hold the phone–let me rephrase that. That’s how close Thilafushi is to civilian Maldivian life. For the Bangladeshi workers who live in Thilafushi, the pollution could not be any closer.  On my visit to this garbage island, as I walked past the toxic mountains and the living quarters of the Bangladeshi workers who are the managers of the filth, I tried to understand the motivation behind the country’s myopic decision to set up one of the most disastrous kinds of tourism. Maldivians had finally voted in a new and promising government in 2008, after years of seeing its country’s economy swell from their same old fishing boats. 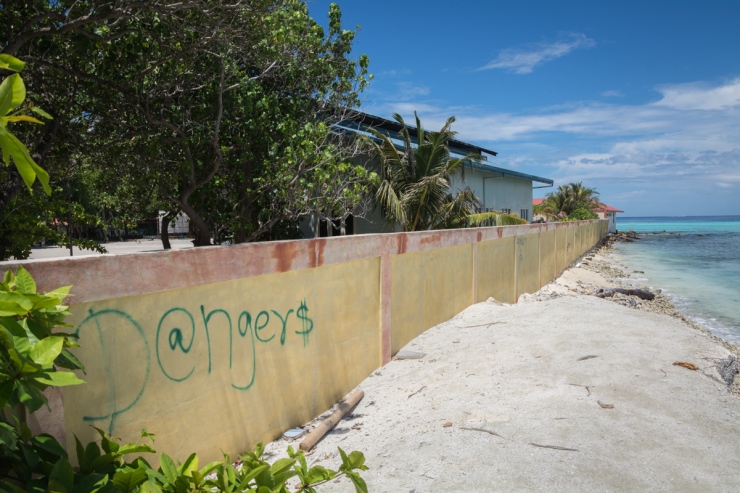 But as I gathered my thoughts that night on my guest house balcony in Malé and watched young people march in protest of Mohamed Nasheed’s controversial arrest over baseless charges of terrorism, I wondered how long it would be before the country would return to tackling the more real and immediate problems snapping at its heels. Tourism, though now more inclusive, was bursting at its seams. The little island of Maafushi on my last visit boasted 38 guest houses, up from the 10 I had noticed in 2013. The garbage burning daily on the island’s eastern shore was now more conspicuous than ever, the smoke filling your lungs before making its way across the waters to join ranks with the dystopian headquarters. 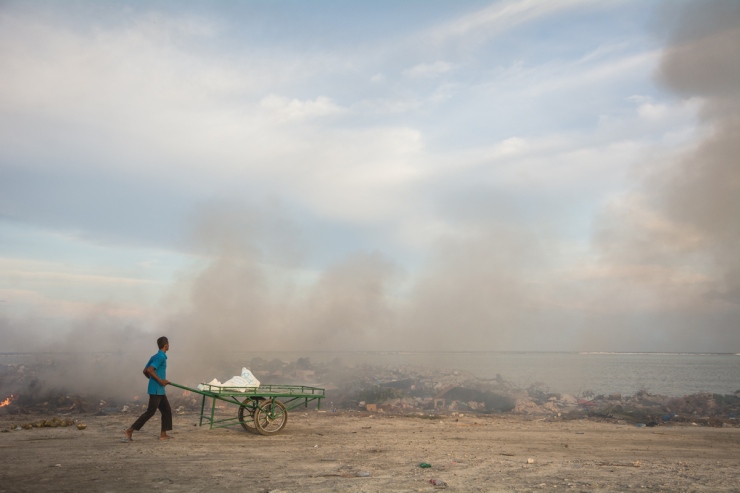 PS: Post my return from the Maldives in April 2015, I put together two visual essays for my Photojournalism program, the first documenting local life in Maafushi that faces erosion at the hands of uncontrolled tourism, and another that seeks to understand the forces that created and sustain the horror that is Thilafushi. I will be uploading these essays upon my final edits and post the links here soon.

STORIES ARE FOR SHARING:

New on the Blog